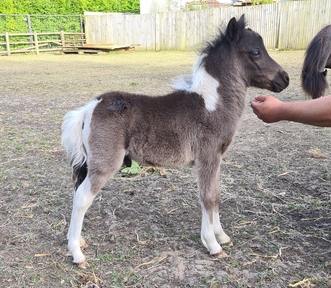 I have a beautiful black tobiano colt, Rocco, that will be available to go to a new home once he has been weaned and reached 6 months of age. He is a pure Falabella and will be DNA tested to prove this. He will be registered on The Falabella Studbook and passport with IMPHS.


Rocco is out of Mosaic Bambi's Final Flower of Rothley ("Flower", a 35" bay mare) and by Tango Del Charco (a 33" black tobiano stallion).
We imported Tango Del Charco from The Netherlands last year. He is a fine 33" stallion with great movement and temperament. He received 1st premiums at the Falabella inspections in 2006 (when he was also youth champion stallion), 2007 and 2008. He also received NMPRS 1st premiums in 2006 and 2007. He then went on to produce offspring several of whom shared his level of success.
Tango's sire is Pinturo Del Charco (bay tobiano) and his dam is Toyland La Tarifa (black appaloosa).
Flower is out of Aesthete Bambi (now deceased) and by Toyhorse Born to be Wild. Her half-brother, Volcanic Ash, was overall champion in 2014 and reserve champion in 2012.
Both parents have been shown and given their bloodlines, I hope that Rocco can be shown successfully with his new owner.
Mum is 35" and dad is 33" so I don't expect him to get any taller than 35". 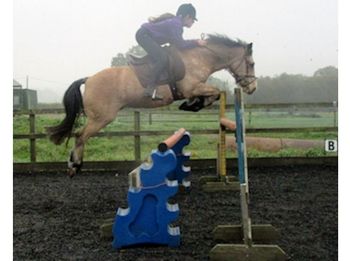