The Hesteyri Horses team were lucky to have tickets provided by Horsemart so that we could attend cross country day at Badminton 2019!

We left slightly later than intended so the cues into the grounds were very long but we managed to get in before the first horse set off!

We headed to the main ring to watch William Fox-Pitt coming home after a great run on Little Fire and also waved Ben Hobday and Wizkid (Harelaw Wizard) off before setting out around the course.

As we went, the course stuck us as beefy and challenging but more for the riders than the horses. Though Badminton is the biggest test for horses, the fences were very cleverly placed so that the way the horse jumped would have more to do with the way they were set up than the fences themselves.

Fence 3 has a difficult run through humps and mounds to a rather innocuous looking gate. The jump itself may have been fairly easy for the combinations if it were on flat ground but the steep slope beforehand made it a great test for how much the horse was listening to the rider.

Fence 4 was a tricky combination of a large spread followed by two steps down and another big spread. The horses needed impulsion for the first fence and then steady for the steps and push on for the large oxer to finish.

Fence 9 were the log piles. The name makes it sound like a little jump out hacking rather than a solid, 1.20m fence! Most that we watched took the single large fence from a gallop and made it look like child’s play!

Fence 10 was Shogun’s Hollow where the riders had to ride through a pergoda, down to a ditch and then take a very acute angle to a choice of small logs. This is a very tricky combination which encourages stops or runouts, again, testing the riding and relationship between horse and rider, rather than being focused on the horse’s athletic ability and courage.

Fence 11 was the classic horse and rider scarer over the vicarage ditch. While a different fence from previous years, it was still a very difficult fence and the riders we saw did a great job of giving their horse’s courage!

Fence 13 consisted of a jump onto the bank and then back down over a brush. The upward jump was tricky enough before having to collect to jump down over the brush.

If the footwork wasn’t quick enough on top of the bank, you can imagine horses trying to chip in, causing a run out if they struggled to make the brush so the second element had a lot to do with striding.

Fence 14 was a very deep trakehner which is really scary to look at but the log on top isn’t as high as other jumps on the course so the hope is that an experienced horse would jump it as though it was a hanging log in the field! All that we saw over it jumped it beautifully!

Fence 15 consisted of a drop into water and over a fence (more like a water feature) before exiting the water again This was another fence that focused on the riders being quick on their feet and collecting the horse before the second element.

James Sommerville and Talent ~ Fence 15b

Another interesting combination was 17, a corner to a ditch to another corner (flagged separately to allow a circle after the ditch if necessary). The water ditch caused more problems than the corners which was another example of great course building, using the terrain, and testing the horses and training without putting the horses at risk.

Fence 19 consisted of an uphill run to a drop fence, then offering a few options, none of them easy and all of them on acute angles, out of the combination. A real test for the horses’ honesty and the rider’s quick thinking and adjustability.

The lake at fence 25 is always an interesting combination and this year was no exception! The combination starts with a drop over a log, not quite into water, a tight turn to step out of water which was followed by another fence in quick succession.

Tom Crisp with Liberty and Glory ~ Fence 25a

Fence 26 was trickier than it looked as it was a sizable fence, followed by a large drop and the approach was through water, effectively taking away some of the horse’s impulsion. We saw the Frangible pin go on this fence several times throughout the course of the day having had horses come down with their back legs. The frangible pin is so important to horse and rider safety and the invention has lowered the number of horse falls due to horses ‘leaving a leg’. If the pin goes, it cost the rider 11 penalties which makes a huge difference to the placings!

Huntsman’s Close at fence 28 was a bit different this year and the fences were slightly less imposing than they have been in the past but it was still a tough one for riders to get their eye in on the way through. The use of the silver birch fences to show them up more clearly under the tree canopy was very clever and seemed to work well.

The Quarry at 30 was one of the last tests on the course and was slightly lighter on the horses than it has been in previous years. The first element involves a drop down before pivoting to the uphill jump out. The horses need impulsion for the second element but also needed to be balanced in the middle to give them a good shot to the second element. From what we saw, most of the horses and riders made light work of this!

We watched the last rider jump through the Chicane at fence 29 before heading into the trade stands to have a bit of a browse and then headed home after a long day.

We had a bit of a watch party for the Show Jumping in the comfort of our living room the next day. What a show that was! There was a lot of gasping, squealing and holding of breath going on.

We’ve never seen anything quite so close as the competition between the last two horses, down to a fraction of a second for a 3 phase horse trials!! We were equal parts overjoyed for Piggy French and gutted for Oliver Townend as they both rode beautifully!

This year’s Badminton Horse Trials has been an amazing display of horsemanship, not just from the riders but also from the course builder and stewards. I’m not sure of the statistics but 2019 surely must have been one of the years with the fewest horse falls! It’s great to see how a course can be challenging for horse and rider without so much risk. The cross country changed placings massively but it was also nice to see the show jumping being so influential too!

These are just our (Team Hesteyri) opinions and musings on the weekend, cross country day in particular. 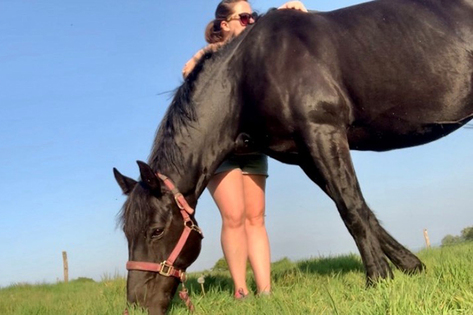 By Cara Winter - Devine Intervention    2020-08-13
Riding jitters. We all experience them at one time or another. That hostile flutter of butterflies in your tummy, the nauseous feeling at the back of your throat, the sweaty palms and the need for a n... 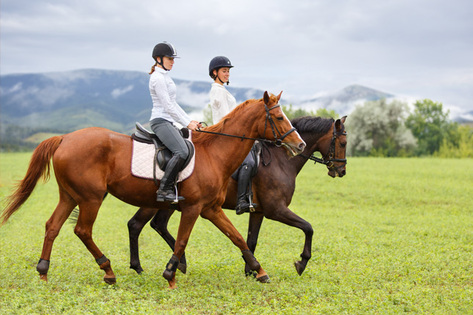 'The Six Commandments Of Equestrianism' For Mental Wellbeing

By Liv Catton    2020-08-12
Well, it’s been a little while since I wrote anything for Horsemart. I think I’ve settled into lockdown life a little too well. The slower pace of life has suited me. I think when I’m older, twi... 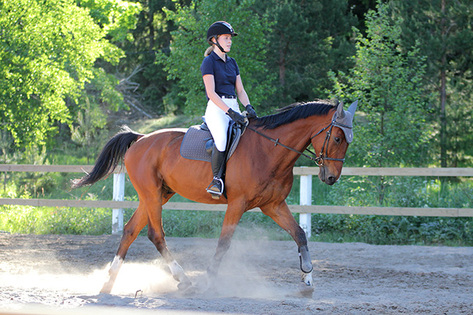 By Mariana Broucher    2020-08-10
The Scales of Training are a system of six points – or building blocks – that are used by trainers and riders in the schooling of a horse. In this article, I would like to explain in more detail w...
Newsletter
Follow us on
Share
Search for all things equestrian on the UK's number 1 equine marketplace!
on horsemart:
home | contact us | terms and conditions | testimonials | media pack | about us | sitemap | help | privacy policy | advertise your horse | affiliate disclosure | scams | private advertising costs | mobile site
©2020 Horsemart.co.uk - all rights reserved - a member of the Friday Media Group  |  dev (((:))) Memória Visual