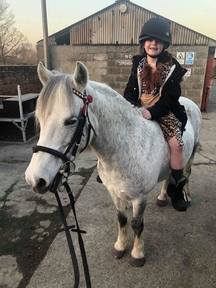 Lily is a superstar pony looking for a home where she can progress further. Lily is a 12.2hh welsh pony x cob and is 9 years old. Lily was very green for her first few years and is now well into her full education.


She is not a novice ride, which is the reason for the sale as the rider is not confident enough to ride her. If you are confident, Lily will take you far, she is unphased by jumps, traffic, farm machinery, aerial displays (we have tank carriers and jets flying regularly over the land). Lily is a confident hacker who loves to canter and gallop but never gets silly, and has led the ride when other horses were not confident enough.
Lily has a beautiful jump, and with further training will definitely be a force to be reckoned with in low level show jumping. I've so far done 70/80cm spreads with her and she flies over them.
Lily is snaffle mouthed and easy to control, but can nap with an unconfident rider, she would be a perfect sister share as she is perfect on the leadrein/lunge or for a younger teen or older child looking to move forward with their riding.
Lily is well schooled and holds a beautiful outline with zero contact, she learns so quickly, picking up sidepassing and leg yielding in about 5 minutes and not forgetting it.
Lily is easy to catch and groom and will stand tied for hours.
Lily has begun driving training and will pull a harrow, but has some anxiety when hitched up, if someone with knowledge of driving were able to spend lots of time with her on this she will make a fantastic driving pony.
Lily does not like motorbikes due to some run ins will ill mannered bikers, but is unphased by even the busiest traffic such as the A20 which we have ridden up and down.
Lily lunges and long reins beautifully.
Lily is club footed so does require a knowledgeable farrier, but this is easily remedied with trims and hasn't caused her any soundness issues.
Lily lives in or out, barefoot or shod and only wears a light rug when it is very wet out, she is an easy keeper and on a regular worming program, she is passported and chipped. Lily is easy to load, have her feet done by the farrier, she can be naughty to lead sometimes but I haven't had any issues since I trained her with a dually halter, Lily is fine to groom and tack up but can pull faces when being girthed due to previous issues with ulcers (many years in her past as a youngster, she has no physical or behavioural issues now from it bar the girthing faces). Lily didn't have the best start in life educational wise but has come so far with her owners and this sale is absolutely heartbreaking for them.
Lily is the sort of pony who with the right rider will make an unstoppable team and easily outstrip larger horses. Lily has worked with both novice and experienced younger riders and myself and has taken everything in her stride, if the napping is corrected immediately, it stops and she carries on without issue, but if she thinks she can get you to dismount and put her away she will try to nap to the gate.
This sale has taken a long time to be decided, so the perfect home is a must. We just want to do the right thing by Lily.
Lily is priced at £1000 ONO
Lily is located near Dartford, Kent
Lily is available to view and try out on and off lead and out on hacks. I have more photos and tons of videos that can be viewed on request. All photos are of Lily from foal tonow, she has greyed out. All Lily's history is known, she has been in 2 homes since birth, mainly with her current owner. ...Read full description
CategoryHorses
SubcategoryShowing
Additional CategoryAll Rounders
Price£ 1,000 ONO
Horse's nameLily
Age9 yrs
ColourFleabitten Grey
GenderMare
Height12.2 hands
BreedWelsh Pony x Cob
Display map 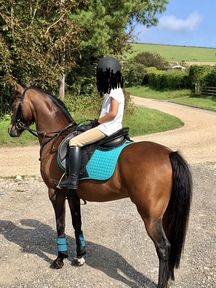 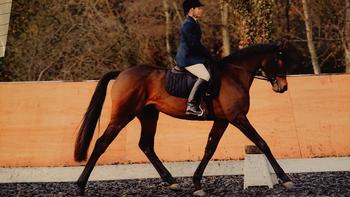 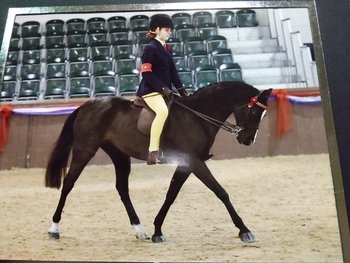