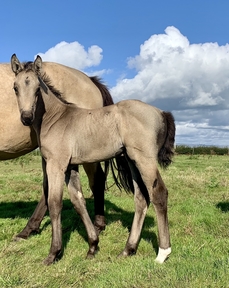 Krumpet is a very pretty and correct Buckskin filly.


Born 1-8-19 from my beautiful homebred mare KoKo, who is 4 this year and will be produced after Krumpet is weaned and her sire is a young and promising 5 year old stallion called FVS Corde Z Million. Her colour is a result of the cream gene which has been passed down from her great grand sire who is a cremello. This means the other two generations have some incredible breeding such as Temple Calypso and Temple Croesus which means she will mature to be highly competitive while possessing an amazing temperament and train ability.

To name only a few in her breeding there is

Temple Calypso Breeders Elite graded stallion
Temple Croesus Bay Holstein Stallion 1995 Kwpn Anglo European Graded. Silver Elite Grade A Stallion. Temple Croesus has won over £33,000 show jumping internationally including the Royal International, Hickstead, HOYS, Olympia, He has competed at all levels 1.40m, 1.50m and 1.60m, Grand Prix & Puissance competitions. Winning the 1.60m at the Royal Show in 2003.
Calypso II has been one of the most important sires in both Holstein and Hannover where he bred international competitors, and influential breeding stallions. It was Calypso II who introduced the Cor de la Breyer blood to Hanover, ushering a new era of Hanoverian jumping breeding.
Caletto I
Atlantus Z
Eugano Van La Roche (Sire of Darco) which is also included in Krumpets Dam line.

Krumpets sire FVS Corde Z Million was bred and produced by Flight View Stud and sold as a 4 year old at that age he was jumping 1.30 at home. This year he has been to Bramham and Great Yorkshire Show where he placed in Workers.
Difficult and heart breaking sale of incredibly loved horses as I am currently growing and establishing a new business with my other half which is taking up a substantial amount of time and effort.
Krumpet will be Passported and microchipped with worming, vaccinations and hoofs up to date. Please no dreamers or time wasters serious enquiries only. Home is extremely important and I would like to be able to keep in contact / receive updates. A sweet and kind filly who deserves the best, available in the new year after weaning....Read full description
CategoryHorses
SubcategoryYoung Stock and Foals
Additional CategoryShow Jumpers
Price£ 2,500 EACH
Horse's nameKrumpet
Age4 mths
ColourDun
GenderFilly
Height16.1 hands
BreedBritish Warmblood
Display map 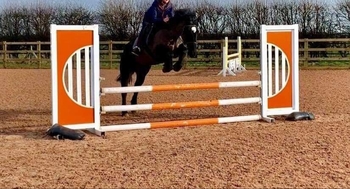 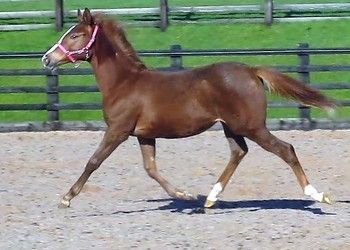