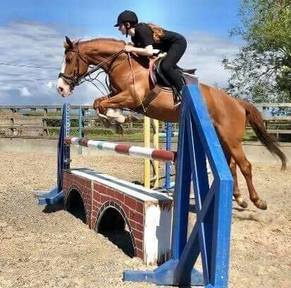 Fidam is an 13 year old 15.3hh chestnut mare. She has excellent stable manners and enjoys to be worked and jumped. She is brave but also careful.


She willl take you to a jump but will also wait if you would like to hold for a different stride
She is schooling nicely round 1m/1.10m courses at home and is registered BSJA,

She is a very easy ride and always tries to please. She is no different if ridden everyday or has a week off
She is not mareish in anyway and we want her to have a loving home

Her grandsire is Quidam de Revel achieved extraordinary results in the show jumping sport. With Godignon he won team bronze medal at the Barcelona Olympics and was fourth individual. They won many Grand Prix’ and competed several times in Nations Cups. On the World Breeding rankings for jumping stallions he was the he topped the list two years in a row.
After the Olympics Quidam de Revel was sold to the Velin family in Denmark. Charlotte Velin rode the stallion with success in the junior competitions. With her brother Thomas, the stallion was, among others, fourth at the European Championship for Young Riders and won the Grand Prix of Hanover and the Grand Prix of Helsinki.

Her great grandsire Galoubet A was a horse ridden by the French rider Gilles-Bertran de Ballanda, in International show jumping and is a sire of show jumpers. He stood 17.0 hh (173 cm).
Galoubet was by the great sire Almé out of Viti a trotter mare. He was retired to stud at 10 y.o. and has since sired many top performers. Galoubet ranked third on the WBFSH standings for 2000/2001, largely on the basis of his son Baloubet du Rouet who won three World Cup Final's in a row (Helsinki 1998, Gothenburg 1999, Las Vegas 2000) as well as team bronze at 2000 Olympics in Sydney.
In 2002 Galoubet was the Grand Sire of World Champion - Liscalgot (Ire) at World Equestrian Games in Jerez, Spain through his son Touchdown.
In 2004 his son Baloubet du Rouet won the Gold Medal at 2004 Olympics in Athens
Also 'Galoubet A has another well known son, Touchdown, dam Lady Willpower. In 1992, Touchdown was the highest placed Irish show jumper at the Barcelona Olympics. 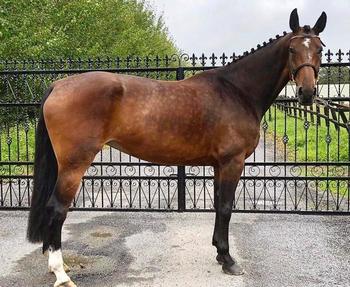 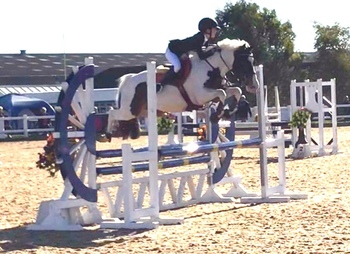 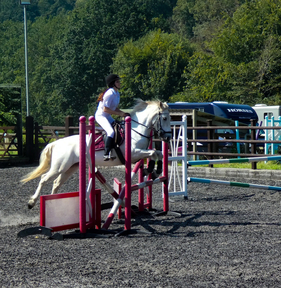