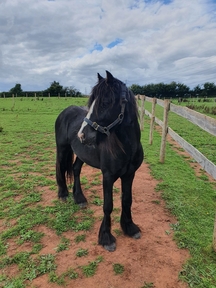 I brought Ted home last Summer to prevent him being put down. The previous owner is inexperienced with horses and was told that he was 4 years old and had been riding and driving him, he developed locking stifles from this which is how he came to be in that situation. I assumed he was more like 3 years, planned to turn him away over Winter and reassess the situation in Spring when he turns 4.


We have since had the dentist out and it turns out he still has baby teeth so is more likely to be turning 2 this year, so there are no surprises that his stifles had suffered from being worked from so young.

We are a riding school and have suffered greatly financially through the pandemic, so we are unable to keep him for a further 2 years before being able to work him.
In the last 6 months his stifles have improved dramatically and we are very confident that he will recover fully by the time he is old enough to work. We have another horse with locking stifles who is now 25 years old and retired, he has been easy to manage and I imagine Ted will be easier as he is so much younger and more likely to recover.

We have had him vaccinated, passported, microchipped and castrated and we are not looking to make any money off him, only to hopefully cover what we have spent on the above.

He is very easy going, he walks well being lead and he is full of character. He has been living with the aforementioned retiree, another rehab case and 2 pygmy goats, he likes to play but will do as he is told by his elders. The goats frequently use him as a bed for daytime napping in exchange for using their horns to pick his nose. It is quite a spectacle. They are all very fond of each other, and while I have no intention of selling my goats, if it meant they could all continue to live together I would consider it.

He has quite nice conformation, moves nicely and is lovely to look at so he would likely make a nice showing pony although we ourselves have less than zero experience of this.

He has previously been driven and ridden and apparently was very good, although he was far too young at the time.

I have not measured him, although I believe he will make between 12 and 13hh. 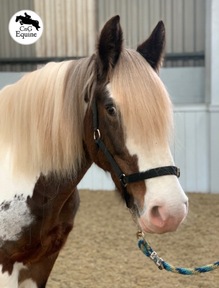 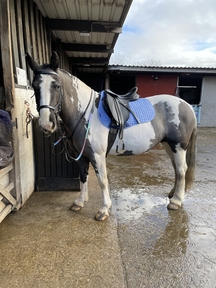