Looking for a project BUT something that doesnt kick, will pick up feet and doesnt rear or bolt when ridden and preferably has brakes. Mostly that is well behaved in the stable and being groomed, caught, good health, broken in. Nothing aggressive or dangerous.


Can be unfit, not ridden for a while, riding issues, spooky, nappy, small bucks, other vices, inexperienced.

Would rather be between age 4-15 but will consider anything.


About me:
I havent ridden for 10 years but previously shared a 6 year old friesian x TB for a couple of years and a 14hh welsh x , i also have worked at a riding school/training facility doing natural horsemanship.
I mostly plan on doing natural horsemanship with the horse/pony, some schooling and hacking.
Possibly in the future if its/my health allowed to do more advanced things but that would be what we would be doing for at least the next few months.
I currently weigh around 14.5 stone and im 5'3, I don't plan on riding anything that is under 15hh until i weigh a stone less.

Must be open to vet check as is needed for insurance
MUST have passport
Must be gelded
Must either be able to deliver or include transport costs in price
Its health must allow it to be ridden, no companions.
...Read full description
CategoryHorses Wanted
Price£ 500 ONO 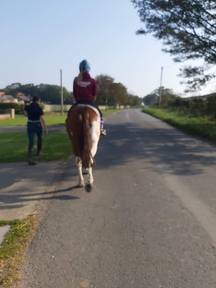