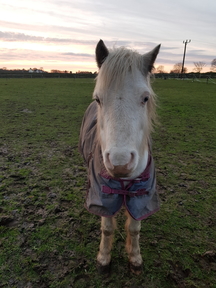 12.2hh grey Welsh Section A gelding. 12 years old. A truly cracking little pony who I'll be very sad to see go. I've had him for 3 years as a companion but having retired my other horse and sent him to a retirement livery, this little man is lonely.


He is looking for a companion home however
he's been used as a lead rein pony in his previous home. I'm told when off the lead rein he would bolt so the children lost interest which is why he was rehomed from there. He's had a saddle and a child on him every now and then and is a bit jumpy but settles quickly as long as on a lead rein. I haven't tried him off the lead rein. He will happily be lead and pop a jump so could have the potential to be an awesome little gymkana pony.

Equally... he's happy rolling in mud and getting fat on air!! Can be wary of men (no idea why) and strangers but will do anything for food so easily tempted by a rustling pocket.

Bad points... has one blue eye so needs a fly mask on for most of summer and sunny days, his eye sometimes gets gunky but I've never had to do anymore than bathe it gently and it's fine. He also needs suncream on his nose on a sunny day... he can be difficult to put cream on but you get used to the technique.
Wormers... at least it's only twice a year. He's quite unfit at the minute as he's only being used as a field ornament.

He's happy living out all year or being stabled at night if his companion comes in. He's a really easy going pony (despite the little stubborn pony quirks I mentioned)

Fencing... ideally needs a 3 strand tape or post and rail fence. He's respectful of the electric fence but will walk straight through it looking for food if the current isnt working. He will settle if left alone in the field in return for a treat ball but he must have other horses nearby or he'll trash your tape fence so he can follow.

I'm looking to loan with view to buy as I want to maintain ownership until I know he has settled and is being treated well. There will be a contract in place. He's the bottom of his herd of 2 so can be a bit bolshy and big for his boots with an older submissive horse but he isn't a bully.
Please feel free to message to more info or more photos, for some reason it will only let me add the one. ...Read full description
CategoryHorses
SubcategoryCompanions
Display map 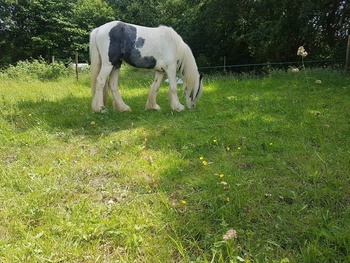