There are currently six unforgiving wildfires ripping through many parts of Southern California; they’ve been burning since last week after strong winds met the West coast of America’s third largest state. Almost 250,000 acres of land have been reached by the fires, destroying nearly 1000 structures including horse stables and training centres.

The Lilac Fire in San Diego has reached 4,100 acres so far, including the San Luis Rey Downs training center, home to around 500 horses. Of this number, the center have already counted 46 to have died. A witness explained how many were too frightened to move from their stable, whilst others managed to flee, only to die of smoke inhalation. A large group of horses managed to escape the training center but are yet to be located as they darted straight into the danger. The death toll is ‘expected to rise’.

The center is an extremely popular place for owners to stable their horses, many of them being thoroughbred racers - meaning the deaths could yet have a much wider impact on the equine world. This isn’t the first horse related tragedy in California this month - 29 horses died in the blaze of Creek Fire at Sylmar Ranch, where the owners had no time to save their beloved horses.  There have also been a large number of reports regarding missing and dead horses across the state. The Santa Ana winds are propelling the fires at such a speed that many people are getting just minutes to flee their homes, without time to save their animals.

It’s understood that the majority of horses from San Luis have been moved to Del Mar fairgrounds which is acting as a safe place for many horses all over Southern California. The community are coming together with donations and sending them straight to Del Mar, where sufficient aid is being provided to all owners and horses that are in need. 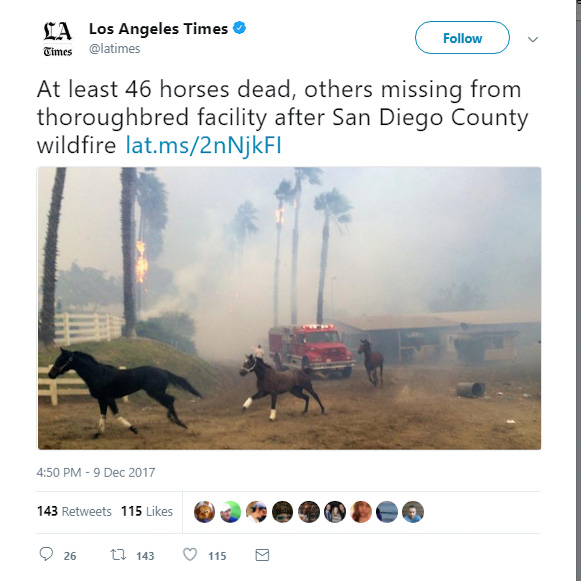 The Lilac Fire was first reported on 7th December and is still burning, although the latest update reports that it’s been 95% contained. Over 100,000 local people have been advised to evacuate their homes, but it’s expected that it’ll be fully extinguished by tomorrow. This doesn’t mean the drama is over, however. Five more fires continue to blaze, putting thousands more horses at risk of death.

There is a GoFundMe page set up for the San Luis rey fire, where you can donate to save the lives of the thoroughbred horses in the area. $618,000 has been raised already and you can donate here.