Which Nations Import and Export the Most Horses?

The importation and exportation of horses and other equine animals happens on a daily basis across the world. As displayed by WorldAtlas.com, it can be a very profitable business. It may seem shocking that such a large number of live equine animals are traded each year, but being such a majestic and powerful animal, the horse is desired all over the world, as trainers search for the best horses they can get their hands on to compete with, or prestigious stables look for the perfect breeding partners to produce foals of extreme talent and beauty.

In terms of general numbers, we can see that the United States export the highest number of horses by far based on data collected by the Food and Agricultural Organisation of the United Nations (FAO). With over 210,000 individuals being part of deals worldwide, they are virtually unchallenged in this business. The Netherlands follow them with a total of 25,354 horses being exported in 2013 alone. The total exportation number for that year was 346,303, meaning the USA exports almost two thirds of the world’s entire shipment. Take a look at the map below for an in-depth view of every nation’s exportation values: 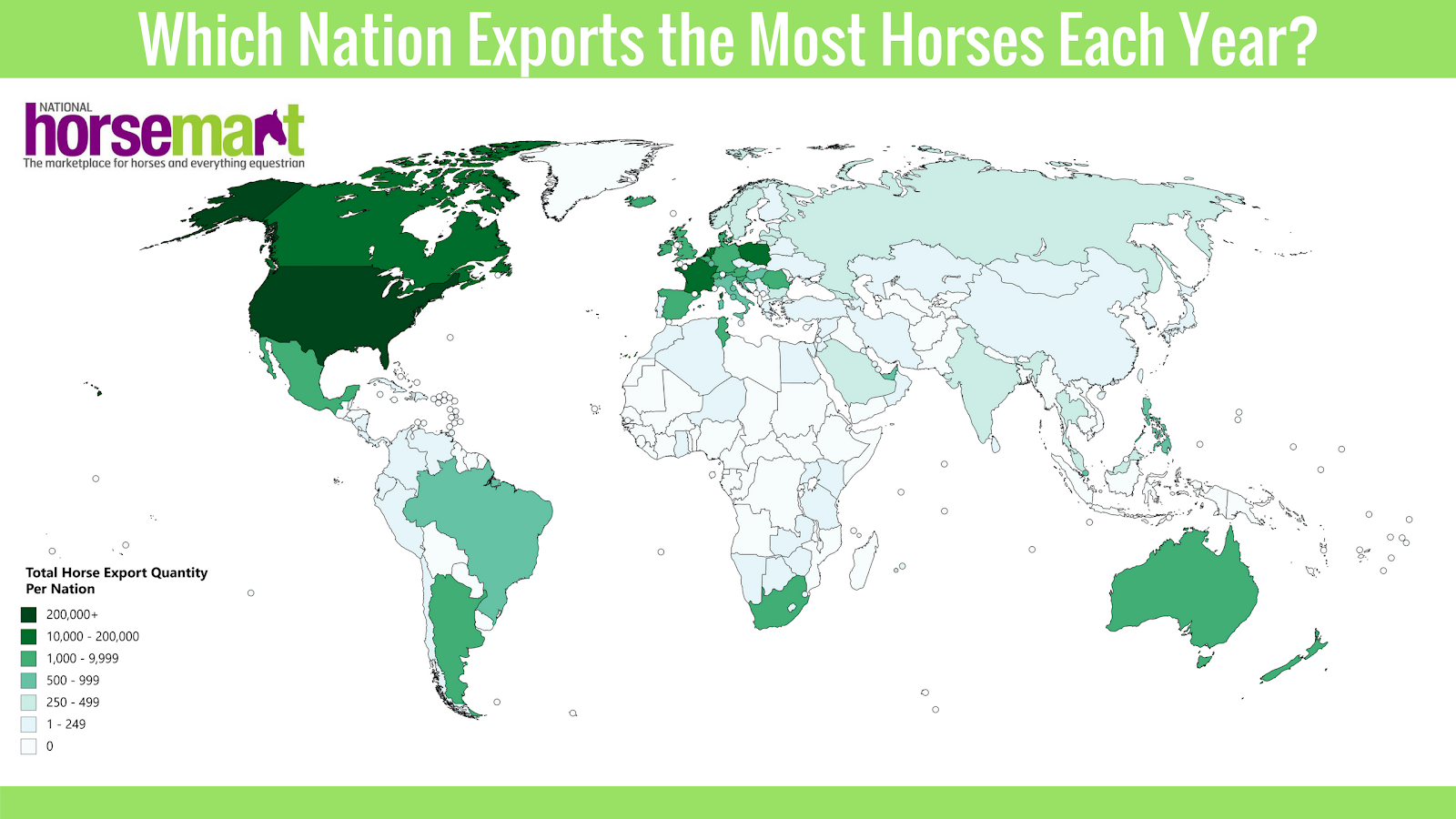 Not only can we look at basic numbers, but more recent research has been done to look at the value in which these exportations come in at. This draws up some different results, as this can give us a more of an insight as to which nations have the highest quality of equine inventory.

From information on WorldAtlas.com, we can see that in 2015 the United Kingdom topped the list as the nation with the highest exportation value ($463,989,000), closely followed by the United States. This is an interesting response, as the total number of horses shipped out by the UK is staggeringly lower than that of the US. The UK only export around 8,000 horses per year, making each horse worth around $58,000 on average. This dwarfs the $1,900 average of the USA. According to World Atlas the UK “Exports equines to foreign countries like China and most of these are of superior breeds. These are for stud farms, primarily meant for horse racing purposes.” As this table is a combination of quantity and price, the results could theoretically be a leaderboard for the most valuable equine nations on the planet:

As well as looking at exportation, we’re able to check out which nations bring in the most horses too. This boasts some entirely different data, as it’s Mexico who top the importation table with 132,719 individuals per year. Data from FAO suggests that the Central American nation are well ahead of anyone else, as Canada follow them with 46,471. The main reasons to import such large numbers of horses are either for competition or breeding purposes. The majority of importation comes from the US or Europe as they are seen to have the highest quality breeds. Countries like Mexico and Canada may lack the ability to produce horses of the best quality. For things like horse racing or equestrian events, they will need to draft in competition standard horses so they can provide high quality spectator events. Currently, Olympic equestrian events don’t specify that horses have to compete for their birth nation, meaning that riders can use any horse they like. This is a big reason for importation as it gives nations the chance to use the highest quality horses possible to help them win Olympic medals.

Take  look at the map below for an insight to the importation values for every nation:

So there you have it, the ins and outs of the horse trading business. There are a lot of rankings that you could probably have guessed, but some quite surprising results from less expected areas of the globe too. Study these maps for hours, there’s information to last you a lifetime; and you might as well test your geography skills whilst your at it!


To look at buying your very own horse, visit our Horses for Sale page now!