A search has been put in place to capture the criminals who decided to deposit a dead horse onto a public footpath in Hampshire. 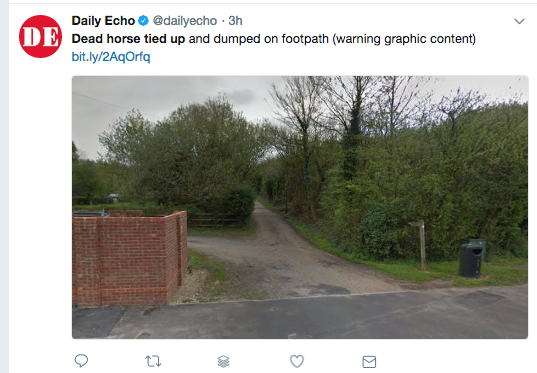 
The horse was discovered tied up on the footpath opposite the Elm Tree Inn in Swanwick. The RSPCA have confirmed that the corpse has been removed by the council and stated that it was “looking into the matter”.

The Borough Council leader of Fareham, Sean Woodward, who lives near where the animal was seen, told the Daily Echo: “This is the vilest thing that I have ever seen, it’s absolutely disgraceful. When I arrived to see the pony, it had a swollen wormy belly and scabs around the neck, suggesting it may have been tethered. It looked like it had been neglected. The person responsible needs to be identified straight away. As a horse lover, it’s horrific to see one of God’s most noble creatures treated in such a horrific way.”

The body is thought to have been dumped between 6pm - 8pm on Monday night. Trevor Cartwright, a deputy leader of the council added: “If an animal dies then it should be disposed of in an appropriate way. This horse shouldn’t be dumped anywhere, it’s awful.” Chairman of Whiteley Town Council also added: “I am absolutely shocked that somebody can do something like this. The people responsible should be brought to justice.”

Here at Horsemart we are absolutely disgusted to hear this news. We urge anyone who may have any information to come forward to help bring this situation to some sort of justice.

Controversy as overweight riders may be asked to dismount