A man is refused his Mcdonalds order - as he turns up for the drive-thru on a horse!

It was a regular Thursday at McDonald's in Beccles, East Anglia - the usual flow of customers were coming in to order their food, some sitting in the restaurant and others opting to take the drive-thru. One of those who had decided to go for the quick takeaway option didn’t turn up in a vehicle at all - instead, he queued for his order on top of a 16hh paint horse!

The extraordinary photos were captured by Twitter user Jason Barrett as the man whose identity is yet to be discovered, started working his way through the order process at the first station - it appeared he had some difficulty reaching the microphone as he towered above the machine with his beautiful horse. One of the workers noticed that the situation was attracting a great deal of attention and went out to speak a few words. A witness who described the incident said it was at this point that the lady refused to process the man’s drive-thru order - the reasons for doing so are currently unclear. 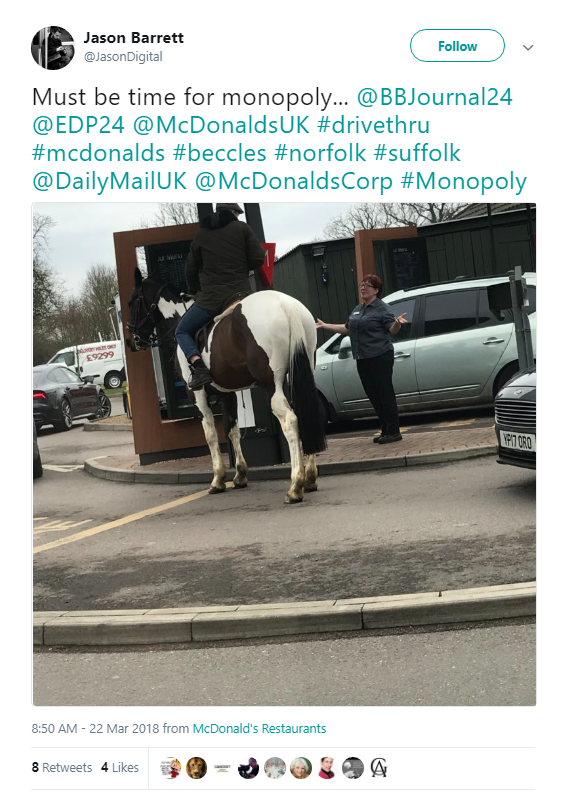 The man clearly wasn’t content with leaving empty-handed, so he hopped off his horse, tied it up safely outside and went in to make his purchase. A few minutes later he returned with a cup of coffee and got back on with the rest of his day.

Everyone was left quite shocked, but both rider and horse were trotting around as if it were an everyday occurrence! It’s a great show of companionship that shows what great friends a horse and a human can be, they really can do everything together. But if you were ever thinking of taking your horse to McDonald's, bear in mind that you might just get turned away!