Getting outside in the fresh air, walking, moving, playing sport is the of the first steps in ensuring health

Are child riders safe with you?  Have you done you Child Safeguarding course, and you are absolutely 100% on the same track, to keep your pupils safe?  How would you deal with grey areas?

Part of my reason for being here in the UK this summer has been to update my British Horse Society registration.  And, one of the things that I had to do, was a Child Safeguarding Workshop. It took a bit of doing to book one, all the available dates seemed to clash with things I had on, or be many, many miles away.  Finally, I found one run by UK coaching that wasn’t far away and on a date that could work.

I trundled along to a nearby community football ground and expected an extremely dull, dry three hours.  What I got, was rather surprising. Yes, it was a very difficult subject – who wants to sit and talk about the various ways in which children are being abused and need protecting from?

There were a couple of things that impressed me immediately – there were 11 of us there, seated at 3 tables and once our lecturer had introduced himself , he asked us to spend a few minutes chatting to each other, what sport we were involved in, our role in the sport, why we were there, what child guarding meant to us.  I was at a table with a schoolteacher who lives in at a boarding school where he teaches rowing, a trustee on a rugby league board and a teenager who is on the first rung of the football coaching ladder. The first thing that impressed me by this lecturer? As we had all come into the room, he had asked our names, and every time he would talk to one of us, answer a question, comment on something we had said, he would call us by name.  Respect, he said, is vital in any form of coaching, and remembering someone’s name is the first sign of respect. Something I do believe in firmly. By the time we had all chatted around our tables about who we were and what we coached, he was on it, knew exactly why we were all there.

There followed a series of general talks revolving around his power point slides and discussion within our groups at the tables.  And each time, he was bouncing around between listening to what we were saying and writing key points down on his flipchart. What did good coaching mean to us?  What were we looking for in a good coach and a good student? And anything that he thought particularly important, once noted on his flipchart, he brought up for discussion.  Being friendly and approachable to the children, but not being their friend. Being approachable, but still being a teacher. The line between discipline, respect while still encouraging children to have fun, since fun is the main reason kids do sport.

We carefully control our horses weight, but is it up to instructors to advise about a pupil's weight too?

He then came out with 15 slips of paper for each table, and in our groups we had to put them on a sliding scale from reasonable / acceptable, through to totally inappropriate.  These were statements that ranged from “Parents leave a 12 year boy home alone, playing video games, while they go out for dinner”, through to “A learner sends you a friend request on social media, and asks to meet privately, away from the school / club”.  Some we immediately said were totally not acceptable, others, we negotiated on, saying we’d need more information. The thing that brought up the biggest question in my mind? “A trainer tells a learner that they are fat and need to go on a diet to undertake this sport”.     Around the room, some of coaches said absolutely not – children should be encouraged to play sport and having a coach telling them that they need to be on diet is going to humiliate them, upset them and discourage them from coming to sport, which is exactly the thing that they need to be doing to lose the weight.  Others said the issue must be addressed as in some sports such as boxing, kicking boxing, martial arts and wrestling, where there are weight categories. And, children who are very overweight or unhealthy would be more prone to injury. My take on it? It becomes an equine welfare issue, having riders who are too heavy for their horses, especially unbalanced beginners.  So – you have an overweight child coming to you on their own pony. How do you tackle the issue? Do you bluntly say to the child that the pony cannot carry them? Or chat to the parents? Talk about rider fitness? Or close your eyes on the issue of the pony’s welfare? I wouldn’t have thought of it in a safeguarding / emotional abusive way, but how do you weigh the pony’s welfare and the child’s?  What are your thoughts?

Ashleigh Sanderson is a riding coach who travels internationally full time.  Part coach, part nomad, part thrill seeker, always looking for new ways to explain the principles of ethical, logical and horse friendly riding and horse care.  Her website is www.kudaguru.com, coming from the Malay and Indonesian languages and so reflecting the amount of time she spends in Asia.  Kuda meaning horse, and guru meaning teacher. Although initially this was a nickname given by the local staff, she has turned the meaning around a little, thinking of it as, “Your horse is your teacher, I just translate”. 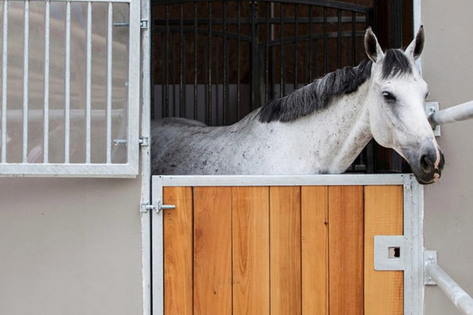 Using Lockdown As An Opportunity To Improve Your Yard

By Cheryl Johns - Livery List    2020-04-08
The current lockdown due to COVID-19 has seen many yard owners shutting their doors to liveries. For many this means more work, although it has unfortunately meant many liveries leaving at short notic...

By Genevieve de Lande Long    2020-04-02
There’s no doubt that one of the biggest concerns for everyone, while the UK is in lockdown, is how to maintain fitness levels. With the new regulations meaning even tighter rules on our ability to ...
Featured