How to fit a saddle to a growing horse and rider

I’m from Saddle World and I’ve come to check the saddle today of this particular horse. He’s five years old, but I've already been told has changed a lot in the last year or so and of course, I would expect that with a five-year-old.

Between four and seven they can be very big changes. Also in this particular case, the rider has changed. She was 13, she is now 15. She was five foot two, she's now five foot six and it's going to keep on growing.

So we have a number of things to consider. But the first thing I'm going to do is check the horses back.

This is Harvey, we brought him as a four-year-old and he's turning 6 this year. He is used for jumping andeventing and as you know he’s owned by a teenager who grows rapidly and changes.

So we've already been through a couple of saddles and most of the problems we had with the last oneswas the rider,  she grew out of it and her knees were hanging off of the front which I think affects everything.

So let's just give him a back examination first and I do that by just checking the reverse of the spine, just check that there is no soreness there and check the sacroiliac. Good through the trapeze area and now thelatissimus, longissimus dorsi up to the lumber. ‘He doesn't like that one bit. Sorry about that’.

Okay, let's look at the other side. So, startwith along the spine.

Interesting actually, he has one shoulder bigger than the other, not at all as usual with young horses and with working a fair bit on the bad rein, you can soon put that to right.

So we have a bit of soreness here and on the sacroiliac here, not too severe.

‘So when you say the sacroiliac, how is that connected to the saddle?’

Well, it isn't but what that does tell us is that it gives an idea of why the horse isn’t perhaps quite square because he won't be bringing that leg underneath him quite so much and so he’ll be pulling with the alternative forehand rather than pushing from behind also making him a bit asymmetric.

So let's just look at him. He's not sex yet, fairly croup high and quite a dip here which tends to throw the weight of saddles forward, yet he’s sore here.

So let's now look at the Saddle because we know the horse has changed a lot since the saddle was first fitted to the horse, so we're not in any way criticizing the person that fitted the saddle because we don't know what we were looking at. So let's now look at the Saddle.
It’s a field house saddle, made in Argentina, a good make. We go through our fitting tests as you might have seen on the other video and this particular saddle is made of a tree on a tree which is of wood and steel and the wood comes around here and here and a metal bar through the top, the head plate and the metal bar underneath the gullet plate.

The leg of the tree comes down here. So it's really important that if that is the angle of the shoulder and this is the dominant shoulder, that we should have a similar angle.

So I rub my hand through, now bearing in mind this is under load, so no rider that is in fact fairly tight. Let's just have a look at the other shoulder and it's much freer here because I'm working as I always should, to the dominant shoulder.

So next, I put my hand inside, lots of freedom at each side of the spine, particularly important under where the stirrups are because there will be more pressure coming from there.

The space must be clear at all times when under load, when the saddle is sitting in balance. In balance means the cantle wants to sit slightly higher than the pommel. So the rider’s weight is in the center, so that the panel sits evenly all the way through and mustn't come beyond the last rib. Now that's just about on the last one, which is just acceptable. The saddle is not bad in balance. There is flocking in here which can be adjusted, but that's really pretty good. So the soreness that he's coming from here is because as his scapula is rotating, it's hitting the front of the saddle and doing that and making it move on there.

It's common sense, but the saddle is not a bad fit at all. I might want to do something, just give a little thought about what we can do perhaps to alleviate this.

This particular saddle has got rolls, which can be takenoff, like so to suit the riders length of leg. Kind of important for this rider who has changed so much in such a short time and might change more.

Now I would trot the horse up and see how much it affected the hip lift because we're not quite even at the back.

So if this is your problem, slight soreness behind. First, see your local qualified saddle fitter through the society of Master Sadler's and then if the saddle can be adjusted to alleviate that a little bit and there are things that can be done, great. If not, you might just need a bit of physio, but look at the angle if this comes up here it's almost asking for friction. although the weight has been for thrown forward of the rider that's been compensated and I understand the saddle has been recently flocked. So it sits fairly level,  which it does.

Of course, I have no way of knowing how old this slight soreness is. It might well be improving since the last adjustment. 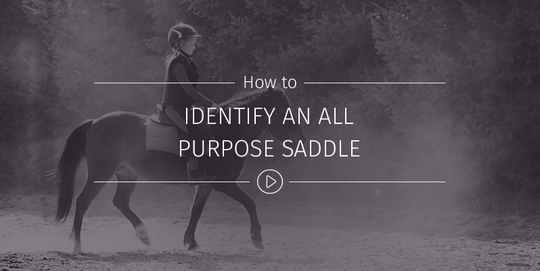 How To Identify A General Purpose Saddle

By Brogan     2019-05-13
Hi, I’m Ken Lyndon-Dykes from Saddleworld, and I want to talk about all-purpose saddles today. Now, that can mean almost anything, say, all-purpose, general purpose, eventing or a saddle yo... 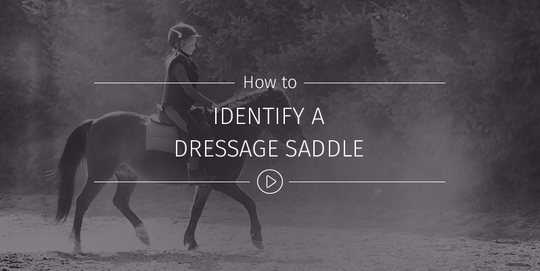 How To Identify A Dressage Saddle

By Brogan     2019-05-13
Hi, I’m Ken Lyndon-Dykes from Saddleworld and today we are going to talk about dressage saddles. Generally speaking, dressage saddles look like this. Sometimes they have skin on the seat an... 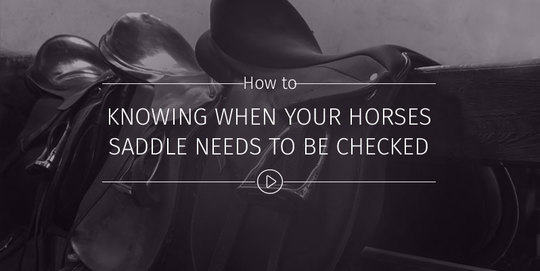 Knowing when Your Horse’s Saddle Needs To Be Checked

By Brogan     2019-04-04
Hi, I'm Ken Lyndon-Dykes from Saddleworld. We will be looking at saddles today and various fittings but before we think about that, why do you need your saddle checked and what effect is it going ...
Newsletter
Follow us on
Share
Search for all things equestrian on the UK's number 1 equine marketplace!
on horsemart:
home | contact us | terms and conditions | testimonials | media pack | about us | sitemap | help | privacy policy | advertise your horse | affiliate disclosure | scams | private advertising costs | mobile site
©2020 Horsemart.co.uk - all rights reserved - a member of the Friday Media Group  |  dev (((:))) Memória Visual