Hi, I’m really excited to be part of the Horsemart blog team. I’m Clare Guest and here’s a quick rundown of myself, where I’ve been and where I plan on going!

Basically, I’m a middle-aged horse-mad woman who is lucky enough to have the most amazing partner in Phil; great chef and DIY extraordinaire. Our household is completed by Paddy the non-event horse, Milton the marvellous mini Shetland, Hamish the collie and two cats, Snuff and McCavity. We live ‘Up North’ in the glorious Forest of Bowland in a place undergoing renovation. As is often the case, the horse accommodation – Bowland Equine Therapy – is immaculate and was first to be completed. Alongside that, we are renovating a barn to ultimately become a holiday let, and then there's our house, which has been described as “the hovel on the hill”. However, with amazing views over Morecambe Bay, I can live with that and I’m sure one day it will get the makeover treatment too.

I've never been sure whether it’s fortunate or unfortunate to have the ‘pony gene’? On one hand, you’re blessed with a healthy outdoor existence, but then there is the financial commitment that goes with the obsession – something I’m not always grateful for my parents encouraging…

Anyway (those musings over), I have the gene, for better or worse, and it started with the ponies on the beach of Weston-Super-Mare.

This was followed by various escapades on ponies from an old fashioned nagsman and dealer based down the road; he was more than happy to rent out horses and ponies to people for hacking around the local area. So with Mum and Dad seated on the latest arrivals at the yard and me on a random pony, we would set off for a couple of hours. Despite the distinct lack of H&S I don’t remember us or the horses coming to much harm, although we did wear hats (of the useless cork variety!) and I can remember a couple of times having to walk to retrieve horses, after one or other of us fell off.

Next stop, the local riding school where I spent days and weeks learning about horse care as well as riding.  The biggest treat was to ride the ponies to the overnight field, bareback in headcollars. However, I yearned for my own pony. Each year I spent any spare cash on tickets for a local show's ‘Win a pony’ raffle and each year there was disappointment when I didn’t win and relief when the winner opted to take cash instead of a pony. After being told that if I wanted a pony, I needed to find somewhere for it to live, I enlisted another pony-mad friend and off we went. We toured the local countryside on our bikes, knocking on farm doors. We hit the jackpot when we found a farm, complete with a couple of stables and someone grooming a pony – the scene was set!

Enter Blaebury, a Welshie who would not have been out of place in a Thelwell cartoon – slightly overweight and very fixed in his mind as to what was acceptable... I loved him and learnt so much roaming round the countryside with like-minded friends and ponies. My most memorable moment with him was the only occasion we jumped a clear round, after countless eliminations. I can still hear the commentator counting us over each jump, sounding more incredulous with each one cleared. Needless to say, our success was short lived and we got eliminated at the first in the jumpoff!

So followed some memorable horses…

Bootle, a pure bred Arab, was a bargain foal from Stow-on-the-Wold horse fair. Whilst not initially showing much potential – having got wedged under the trailer breast-bar – he became a great little horse and friend. We trekked back from Weymouth to Swindon for Oxfam, he became a prime ‘pub horse’ in the New Forest and loved XC, but never saw the point of dressage.

Tober was a one of a kind ISH who I backed for a friend and then bought. He instilled in me the addiction of eventing but also tested my knowledge of injury and rehabilitation – how such an accident-prone horse ever made to it a competition (and he missed a few...) was a miracle.

He took me from a complete newbie who got eliminated for falling off twice at fence 4 of our first event, to double clear at Blair Castle 1* (old long format). Along the way we won area RC champs, competed at BD regionals and showjumped.

Paddy I bought as a 4yo and it was love at first sight; when I saw him in the stable I had already decided he was for me – heart ruling head. He was smaller than previous horses and not so much to hold on to, so I don’t mind admitting that I fell off him more times in 6 months than I had in the last 10 years!

He won the BRC open area Horse trials and we were part of Lakes Riding Club team that took the 100cm SJ championship at Lincoln. He was more than happy at Novice but unfortunately Blair/intermediate ambitions came to nothing after he developed a stifle issue, probably due to trauma as a youngster. He’s currently making extensive use of our facilities and I’m spending too much time browsing Horsemart!

As much as I wanted to work with horses, I actually followed my parents advice and did my A levels over BHS qualifications on the basis that I would get a job that actually paid some money so I could continue to have my own horse. So, following my A levels (dismal results) I did a degree and ended up in the world of IT as a developer. Although the work was OK and money was good, I felt I was missing something. So when the opportunity arose, I followed my long suffering partner up north where he undertook a PGCE and I fell on my feet when I found a livery yard with an inspirational owner who took me under her wing and trained me up for BHS exams. Having achieved my AI, I decided I wanted to learn in more detail about the physiology and how the horse works, so that led on to an MSc in Equine Science. I met some amazing experts and was lucky to do work for my dissertation at Langford, Bristol vet school. What came next was probably my biggest challenge – rookie lecturer at Bishop Burton College, which, for someone who's quite shy, was terrifying. I was lucky that the fantastic students, both there and at Myerscough, were kind. It was them that made the job so rewarding, plus, I was able to keep up to date with my favourite areas – physiology, biomechanics, therapy and rehabilitation.

As well as being able to event, working in the IT industry enabled Phil and myself to save up and buy the farm where Bowland Equine Therapy is now based. Not one to shy away from an opportunity, the place required more than a little TLC. We took on two major projects at the same time – rationalising all the dilapidated barns attached to the house into one – ultimately to become a holiday let – watch this space. More importantly, installing an arena and new building to house the equine rehab unit. After much stressing, I was lucky to be awarded a European Leader fund grant towards the cost of equipment.

Bowland Equine is the culmination of a lot of hopes and dreams shaped by my passion and experience with horses, injuries and research. My mission is to use my knowledge, experience and facilities to provide a supportive environment that gives horses the best possible chance of recovery and return to work. Whilst we have the water treadmill, combi-floor, massage rugs and other therapeutic equipment, I also focus on the holistic view. The yard is designed around supporting the horses' behavioural needs as much as physical, the stable ‘patios’ being a good example. Being a small (but perfectly formed) yard means that I can be involved in all aspects of the horses care, getting to know them and their characters, and as such, plan the best program for each and every one.

When looking back, there were many times when I thought my vision would never become reality – it costs too much, the property isn’t out there, I’m too old! Whilst the path is not always obvious, if you take opportunities when they arise, even if they scare you, things will happen. Yes, there will be times when you'll wish you’d taken a different route, and worst case scenarios do occur, but there’s generally a way out of it if you’re flexible and determined.

Find out more about Clare and her business, Bowland Equine Therapy, by visiting her website or following her on Facebook. 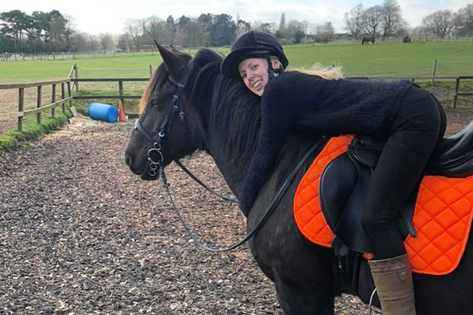 By Chloe Dudley    2020-07-08
Hi there! My name’s Chloe and I’ve just become a contributor for Horsemart. I'm so so excited to be here! My content will mainly consist of discussions and help/advice. I’m 23 years old and live...
Newsletter
Follow us on
Share
Search for all things equestrian on the UK's number 1 equine marketplace!
on horsemart:
home | contact us | terms and conditions | testimonials | media pack | about us | sitemap | help | privacy policy | advertise your horse | affiliate disclosure | scams | private advertising costs | mobile site
©2020 Horsemart.co.uk - all rights reserved - a member of the Friday Media Group  |  dev (((:))) Memória Visual