May Round-Up With Hesteyri Horses

May was a brilliant month for us, and it is finally starting to feel like summer might show its face!

We started the month with a fantastic day out at Badminton thanks to our wonderful sponsors Horsemart. A great time was had walking the course designed by Eric Winter and taking some pictures and videos of the riders we saw along the way. It was brilliant to see so many young and first-time riders having completions, and eventing getting safer without losing any of the thrills. We had a quick look round the shops, and stopped to chat with a few friends and our lovely sponsors, Digital Horse who provided us with some new caps for our summer wardrobe. The next day saw us holding our breaths whilst watching the show jumping at home, and what a nail biting finish it was to see Piggy French stealing the win - by less than a second - from Oliver Townend! Find out more about our time at Badminton in our blog, here.

The same Monday saw us with trainers’ passes to Bath racecourse, courtesy of John O’Shea racing. We have backed Belle, Squirt and Ri for them, and have had Libby on livery for the whole of May on rehabilitation livery but we hope to have her up and running with the others when she’s feeling better! The day at the races was an amazing treat for us, and the team had an incredible day, with two winners and a runner up at Bath, and another winner at a different racecourse! We were even lucky enough to have a glass of champagne to celebrate Show me the Bubbly’s amazing win. Thanks so much to them and to Horsemart, we were very lucky!

May also saw an influx of new arrivals! We welcomed Licci as a retirement livery, she’s happy and settled having put all of the others in their places!

Alfie arrived for backing, he had a great month, starting out walking out in tack to get used to the area, and being leaned over already by day four, which is amazing. By day five he had a few steps with a rider, by day seven he was walking without a leader. Before long he was trotting out, although he had a few days where everything was very scary! He changed riders in his last week and had his first canter which he really enjoyed, he also had a few longer hacks. This culminated in his owner coming to ride him before taking him home. She is going to keep us posted about his progress and we can’t wait to see how he goes. Here he is in his progress video with a lovely review from his owner in the description!

Charlie was also on backing livery this month, and was meant to be 11.3 but actually turned out to be 10.3! Good job Meg is absolutely tiny! He started out very spooky but is a quick learner. We did plenty of work on the ground, with walks out and long reining sessions in the arena before a rider was a thought. He also started being leaned over on day four, and although he was slightly more worried than Alfie, he was riding without a leader by day eight! He had a bit of work in the arena, and also started cantering in his last week. His little rider came to see him, but was very nervous and upset Charlie a little bit. He has one more week with us in June, and then he will go home where there is another little girl to ride him until his rider is a bit happier.

Macaroon also arrived, for a few weeks schooling livery, followed by sales livery! His owner had been concerned that a life of mainly being stabled, along with lots of hours in the arena, wasn’t really for him. The minute he got here he was turned out, and he had a whole week of hacking before we took him in the arena. We used lots of poles to keep the arena work interesting. He also hadn’t seen any jumps in a while, so the second week saw us jumping him over our fillers at home. He went out to a fun ride in the second week also, jumping all the jumps and increasing in confidence all the way round. In the last week he went to clear round at Moores where he also gained in confidence, jumping fantastically round the 80cm.

Poor Libby had started the month preparing to be rebacked after having time off for a bad foot. Unfortunately, when the farrier came he found she had an under run sole and without more time on box rest the structure of her foot was being jeopardised. She has had nearly the whole month on box rest and is going to have some time away at grass before she can come back into work!

We had one session with Ross, owned by David and Anne-Marie (who used to own Amadeus, Dior and Star). He was beautifully behaved and worked really nicely in the arena, settling nicely and being surprisingly unspooky.

We also went out to visit Bertie, who has been having a few teething problems in his new home. This can be the case with rescue ponies, and we are always keen to help where we can, his new owners now have an action plan and are getting along a lot better.

We caught up with another of our previous horses, Blue, which was really emotional as we had completely lost track of her. Her new owner called us out because he was having issues shoeing her, we travelled down to the New Forest to help out, and see the gorgeous girl!

Our horses are also all doing well. Sienna is backed and riding out really nicely in walk and trot. She a little Welsh Section A, five years old, and was involved in an RTA which left her a little bit worried. We restarted her, and she has been calm and well-behaved all the way through.

Kerry is as wonderful and golden as ever, he has been enjoying some lower level jumping including some tackless work.

Tom has been working really well at home and now just needs to replicate that out and about.

Rose and Swift are back in work, Swift is going to work on the flat for a few more weeks, Rose has started to jump and we are looking forward to a good season with her.

We are now on track to have an action-packed summer, and hopefully have a few more competitions! We have a few new faces, catch up with us in June to see how they go!

By Genevieve de Lande Long    2020-04-02
There’s no doubt that one of the biggest concerns for everyone, while the UK is in lockdown, is how to maintain fitness levels. With the new regulations meaning even tighter rules on our ability to ... 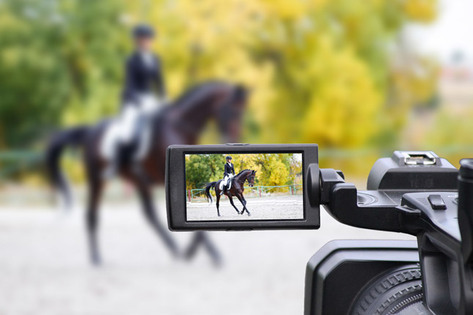 An Update From Edward Chitty - Could You Try Online Dressage?

By Edward Chitty (Equine Tuition)    2020-04-01
Hi, Edward here, I hope you are all well and coping ok with the coronavirus outbreak. I thought I would let you know how it’s affecting the judges and coaches. As all British Dressage event...
Newsletter
Follow us on
Share
Search for all things equestrian on the UK's number 1 equine marketplace!
on horsemart:
home | contact us | terms and conditions | testimonials | media pack | about us | sitemap | help | privacy policy | advertise your horse | affiliate disclosure | scams | private advertising costs | mobile site
©2020 Horsemart.co.uk - all rights reserved - a member of the Friday Media Group  |  dev (((:))) Memória Visual