The new Renewable Energy Heat incentive ‘RHI wood pellet boilers’ scheme has come into much controversy recently. However lately, a rather unusual use for the boiler has emerged.

It has come out that the wife of a previous Ulster Unionist (MLA Neil Somervill) uses the system for the arrangement of her family business.

The pellet boiler is used to run her ‘horse solarium’

Mr Somerville described: "My wife runs the business which also includes the grooming and clipping of horses, but due to the type of work she does, it wasn't possible to carry it out all year round,"

"The installation of the wood pellet boiler has meant that my wife is now able to carry out her work on a year-round basis and a horse solarium has been installed. We are happy for an inspection to take place." he added.

So, as we invisage horses wearing goggles and tanning themselves silly in a sun bed we may ask, what actually is a horse solarium, and what is the purpose?

David Kirkpatrick, who is the leader of the Equine Council for Northern Ireland has one and describes: “They are the "same as what a physio would use for the human populace".

"I would use the solarium for my own horses after work. The whole purpose of it is that the heat gets into the muscles, said Mr Kirkpatrick.

"You put your horse in for probably half an hour a day maximum, or maybe half an hour twice a day, it's not a continual process, at least I've never heard of anyone using it on a continual basis.

"You can also use weaker solariums in stud farms to falsify the length of the day - you're encouraging your mare to come into season, to think it's spring."

“The horses seem unfazed and no goggles are required”.

"My fella just stands and eats hay, he just goes to sleep underneath it," Mr Kirkpatrick added.

It seems that in addition to being a enjoyable experience, the solariums are advantageous pieces of therapy equipment that can help to prevent injury, relax muscles and improve circulation.

Could this be the new method to gaining that extra edge in an increasingly competitive industry?

How to become a chartered equine physiotherapist

Advice On Dealing With Coronavirus (COVID-19) For Animal Owners

By Genevieve de Lande Long    2020-03-31
The one thing that’s clear is that the best action we can currently take towards reducing the spread of coronavirus is to stay at home and wash our hands regularly. But what seems to be less clea... 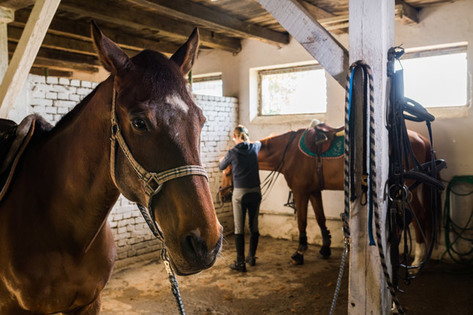 By Genevieve de Lande Long    2020-03-26
Our horses’ joints are put under a lot of strain on a regular basis. Every activity your horse partakes in puts excessive force on their joints, whether it be due to fast and sudden movements involv...
Newsletter
Follow us on
Share
Search for all things equestrian on the UK's number 1 equine marketplace!
on horsemart:
home | contact us | terms and conditions | testimonials | media pack | about us | sitemap | help | privacy policy | advertise your horse | affiliate disclosure | scams | private advertising costs | mobile site
©2020 Horsemart.co.uk - all rights reserved - a member of the Friday Media Group  |  dev (((:))) Memória Visual