Confessions Of A Working Pupil: What To Expect From The Position 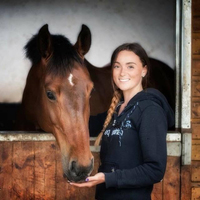 Well, I’m sat writing this new Horsemart article in front of a heater while the weather is honestly biblical outside. I’ve got my ski fleece on already and I have officially retired from shaving my legs for the rest of 2020.

Anyway, not to sound all Jon Snow but winter is coming. Yeah, I know... Game of Thrones is over and we should all get over it but I will never be ok with that final season. Bran on the Iron Throne? The little twerp that thinks he’s a bird? Get real. He’s not a leader; he’s a confused art student at best.

Yep, it’s definitely colder, darker and unpleasantly damper! I know it’s a bit depressing. Not for people who live in Switzerland or Barbados obviously. But for us lot, stuck in middle earth, it’s hard not to feel glum.

However, with the seasonal shift on the horizon and the new school terms for all the unfortunate young people held against their will in full time education...

Yo, teenagers... Don’t believe teachers when they tell you those are the best years of your life. Maybe for them... but ask yourself what kind of a maniac goes back to school on a voluntary basis? It gets waaaayyyyyy better! I can have Pot Noodles for dinner whenever I fancy. I can play the Euro millions as many times I like, and I can book a flight to go wherever I want, whenever I want. Do I take advantage of these privileges? No, I do not. But the point is, they’re available to me.

Anyway, it’s got me thinking about change and fresh starts, which leads me seamlessly into my chosen topic; my own start in Equestrianism.

Confessions of a working pupil...

YAASSS this is such a rite of passage for so many of us! Imagine just how many hilarious stories are out there of working pupil experiences. The industry has come a long way since the days of Jilly Cooper but the scandals are still very much there! Believe me...

Amongst the major cock-ups and dramas – and Lord, there are so many – my crowning moment was sending my rider off to do a 4* test on a 5* horse with not one single stud in. I’ve never spun a spanner so fast in my life once we realised. But amongst the chaos, there are also the parties and the good times! I’m instantly reminded of getting very, very drunk at a party at Barbury and a group of us disorientating our designated driver so greatly we ended up driving along the gallops in his Peugeot... sorry owners of Barbury. There was a lot of vomiting in the lorry the next morning for the event.

Back to the point. I was recently having a chat with a young girl about getting into the industry and all the different paths available and thought maybe it would be useful to give a firsthand experience of being a working pupil.

So, to briefly set the scene, I am not from an equestrian family, neither of my parents went to the Olympics, in fact – bar one amusing afternoon in Florida western riding – I don’t think either have sat on a horse. My grandparents didn’t spend their time hunting or racing or whatever it is horsey families do. My godmother didn’t invent sitting trot and I can safely say we didn’t have one useful equestrian connection. I was as removed from the equestrian industry as you could be. I rode horses, obviously, but I didn’t compete or anything like that and to be perfectly honest, I wanted to go to Art School and become something bizarre like a wallpaper designer.

So, fast forward ten years... how on earth did I fall into riding instead? Well, I guess becoming a working pupil changed my life! So if you’re considering it as an option into riding, grooming or any other sector of the industry and want an insight into what it’s like, then here we go.

Yes, let’s not sugar coat it. It’s really tough. The hours verge on being a violation of basic human rights. The English weather never ever has a positive effect on your working hours and/or conditions. You are considered practically useless; in fact, the yard cats are of more use than you are. At some point everything will ache. You will pretty much give every fibre you think you’ve got to offer and soon discover more is expected. You don’t earn any real money for this act of generosity. There isn’t an HR department and so constructive criticism can really come in any form. But you get more opportunities than you’d ever expect, you’ll meet more people than you’d ever think you’ll meet, you’ll make friends for life and you’ll learn so much without even realising it half the time. In brief, it’s exactly like what happens in the Karate Kid.

First off the general rule of thumb is the Head Girl/Lad/or anything else they identify will not be wildly friendly. I’m not saying they’re mean but... They’re busy, it’s their neck on the line and you are not their friend during the hours of 7am-6pm.

An average day during my apprentice years started at 7:30am. Competition days could begin at 2/3am or even require us to set off in the evening and drive through the night. This is what’s called “pulling an equestrian all-nighter” and much like a good old fashioned rave, you need some sort of stimulant to make it through. My suggestion would be Jelly Babies, which are a well recommended blood sugar requirement to stay awake at 3am. You’ll find yourself in a strange, hypnotic loop where you’ve forgotten who or what you are, except you’ll have an unwavering compulsion to offer drinks to the multiple horses travelling with you – a bit like a delirious air hostess. Stop eating the jelly babies if you start offering Duty Free shopping to the passengers.

There isn't any overtime. It is expected that you arrive 5 minutes earlier than whatever time has been set and be ready to get going immediately. When at work, your needs will become second to your rider’s. You are there to make their day easier, and their day is always far more important than your own.

But an average day was the leisurely start of 7:30. It would be the usual yard duties; mucking out, filling waters and haynets, cleaning feed buckets, making feeds, moving horses from stables to fields and vice versa, putting horses on the walker, etc. We were always allowed a short breakfast break before riding began. I would run in and make myself a coffee that resembled tar and hope devastating levels of caffeine and adrenaline would carry me through the rest of the day.

Then, we’d usually ride/ lunge/ hack 2-3 horses before lunch. I was fortunate I was allowed to school and jump some of the horses. Obviously not the very special ones – remember, I was useless – but my rider was so kind to even try and improve me on a daily basis. I was, at that time, what we call in the industry a “No Hoper”.

Lunch was next and I usually just slept for half an hour as a quick recharge before the afternoon started. Afternoons involved more riding, more yard duties, possibly bathing, plaiting and packing the lorry for the next day’s competitions, moving horses around, putting more on the walker, cleaning all the tack used that day and finishing up for the night. Our working day finished at 5:30 and if we ran out of time... we kept working until the work was finished.

It’s gruelling, and without the lure of personal success or financial reward, it’s not something any sane person would continue doing for multiple years. But as a learning tool, an introduction and a foot in the door – in my opinion, there’s nothing better.

You’ll be totally moulded to be the very best, most productive version of yourself that you can be; literally no second of your day will be wasted and your whole thought process for going about your day will naturally evolve to run as effectively as possible. This will stay with you forever. It'll be incredibly annoying if you then, like me, move into a house with a useless man and have to watch him put on a daily performance called “How to be as unproductive and destructive around the house as humanly possible.”

You’ll learn so much about responsibility and accountability; after all, on a daily basis you’ll be in charge of £100k horses – mistakes happen but they’re not easily forgiven. You’ll get the chance to understand what it takes to run a business and not just be employed. You’re offered a glimpse behind the scenes of top sport, to be one of the chosen ones that mere muggles only dream of. A firsthand opportunity to see what real dedication looks like. You’ll learn to totally appreciate what teamwork really means – and not like in One Direction where we all know Harry was carrying the brunt of the load. You’ll learn what it takes to maintain a top sport horse; and anyone involved in the industry will tell you it’s so much more than you imagine! I mean it’s unnervingly obsessive. There’s a science and an art to it... and let’s be honest, a bit of magic as well.

And hey... maybe you won’t become the next Pippa or William. Maybe you’ll go on to be a sales rep, or a groom, or an event organiser. Or maybe you won’t stay in horses at all. But if you ask me, that’s a pretty great list of life skills to learn, isn’t it?

The Top 10 Things To Consider When Buying An Equestrian Property

Article · How To - Tack and Equipment