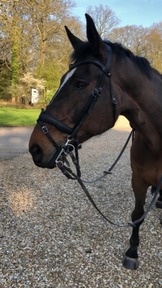 Heart breaking decision to sell my forever horse. Now 18 years old looking for a quieter life, still has the ability to compete in dressage and low level jumping.


Lack of time for Balou due to work commitments and being a single Mum have forced this decision.

I have owned Balou for 14 years now, purchased as a 4 year old and within that time he has been a dream to own. Kind and talented with a cheeky side that everyone loves. He is very honest in everything he does and very loving, great with small children and dogs and is always a favourite on the yard. Out of LUX Z. He loves to be fussed and can be ridden as much or as little as you like and his behaviour never changes. He has such a great attitude towards his work, will try his best at anything. Will hack out alone or in company, can be a little spooky, but mainly at the change in colour in tarmac or a sign painted on the road. Never bolted or taken off with me. In his earlier years he was a fan of spinning around and bouncing on the spot on occasion, but hasn't completed either of those tricks for a number of years. Despite his occasional naughty behaviour in his younger years, it was never anything that worried me.
Enjoys his flat work lessons, but can be a little lazy. Lives for his jumping and loves every minute.
Previously competed up to fox hunter, ODE, and competed up to prelim in dressage (only as its my least favourite discipline) he has three lovely paces and would still do well.

In 2010 Balou and I were clipped by a lorry whilst out hacking, he fractured the outer wall of his hoof and had a year off work with a bar shoe on. He subsequently developed a hook of arthritis over his cannon joint, which has successfully been medicated since. He has had this medicated around four times since the accident and last year had it x-rayed again and there have been no changes. Which is good news. He will need to continue however having this medicated. Currently my physio keeps and eye on him and the vet checked his over each year when his boosters are due.

Since then I have always kept him on a surface working, we dont trot on the roads and he has the physio once every 6 months for a treatment, this seems to manage it quote well. He also has a joint supplement for support.

He is perfect to clip, have his teeth done, practically loads himself, stands for the farrier, good for the vet. Can't think of anything that he particular dislikes. You can leave is door open and walk off and he wont come out. However he wont live out in winter, he actually prefers to be in. He is normally out at night in the summer and in during the days, and then maybe a few hours or no turnout during the winter. And he's happy with this.

This is an extremely difficult decision, and one that I never thought I would have to make, but I will only allow Balou to go to a 5* home where I know he will be well looked after and loved as its what he deserves. He is a very special horse to me, and I would love to be able to keep in contact to know how he is. ...Read full description
CategoryHorses
SubcategoryAll Rounders
Price£ 3,000 OVNO
Horse's nameBalou
Age18 yrs 6 mths
ColourBay
GenderGelding
Height17.2 hands
BreedBelgium Warmblood
Display map 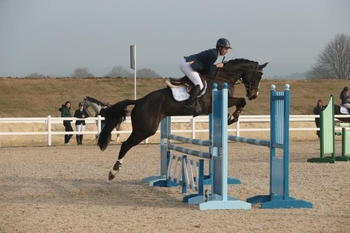 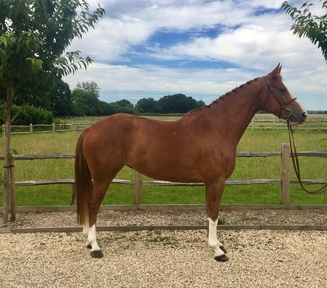 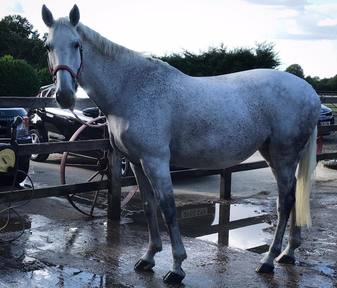