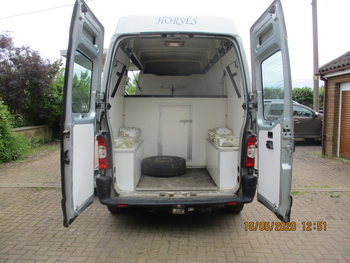 I was sharing this lorry with a friend who has moved away and I, very sadly, cannot justify keeping it on my own.


It was professionally converted in 2016 by Milton Keynes Horseboxes and was fitted with a reconditioned engine at the time with the power steering pump and clutch also being replaced. It has only done 9,500 miles with this new engine but we have done loads of long trip including The Netherlands and Jersey! and it has never ever let us down. The van itself has 218,000 on the clock but it has also just had all new brake discs and pads, new front brake caliper, new rear brake pipes and 3 new tyres and passed its MOT 9th March 2020 with only minor defect shown a chip in the windscreen not affecting drivers view.

When we bought it it came with a weight certificate for 2.36 tonnes unladen so has a potential load of 1.14 tonnes so 2 reasonable size horses. It has a much higher ceiling than a trailer and a movable partition so you can accomodate 1 really big horse if needed.

This is a Renault Master DCi140 so a 3.0 litre engine with lots of power even with 2 horses on board - no slowing down on hills needed! On our longer trips were were getting 35 miles to the gallon so fairly economical too.

There is a camera showing the horse area with a large 2 channel colour screen and we also have a second camera we haven't fitted that could be put on as a reversing camera if wanted. We also have some large rearing horse decals that you could put on if you like that kind of thing :)

Now the not so good bits! the drivers seat has a rip that has been patched and a seat cover put over, there is a dent (though paint not broken) around the rear tie and a scrap along the rubber buffer at the bottom on one side, the inner face of the lift up part of the ramp also has the paint peeling but there is no damage and this could easily be repainted. 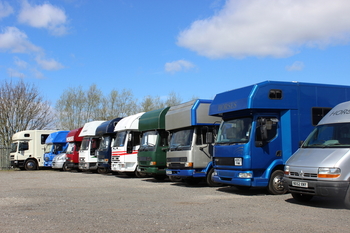 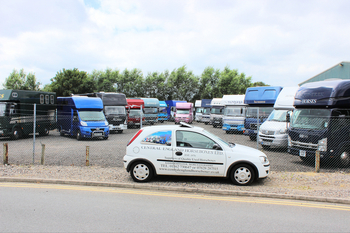 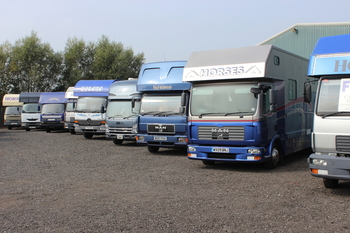